Now that you’ve read about the benefits of using visual schedules at home – what, who and why, you’re ready to move on to finding out more about how to choose the right kind of schedule for your child. 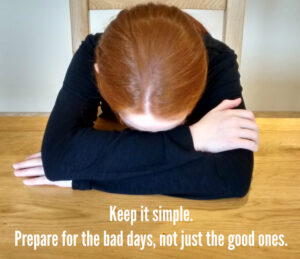 The most important thing to think about when deciding which type of schedule will best suit your child is that it has to work when they are having a really bad day as well as a good one. That’s the time when you and your child are going to be the most stressed and probably need the support provided by a schedule even more than when things are going well.

Most of us don’t perform to our best when we’re stressed so why would your child? Consider choosing a visual schedule that is easier than you think your child can handle. More complex is not necessarily better – keep your focus on the goal of independent usage. 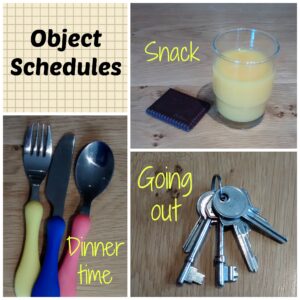 This is the simplest type of schedule and works well for children with few language skills or who are mostly non-verbal. Tangible objects are chosen to represent activities; for example, a cup for snacktime, a spoon for meals or a shopping bag for trips to the supermarket.

Hand the object to the child to indicate the activity they are moving or transitioning to next. It’s important to make a list of which objects you are going to use to represent each activity and above all, be consistent. Pinterest is a fabulous resource for ideas!

A child is ready for a picture or photograph schedule when they can consistently match pictures in the same way you would in a simple lotto game. Some children find photographs easier to recognise whilst others can use drawings. 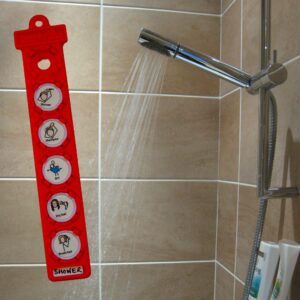 For my own son I started by laminating photographs of real objects and built up a series of activity cards he could follow. I included images of household items such as his clothes and toys as well as places we visited regularly like the park and shops. When he was ready to recognise drawings I used printable pictures from websites such as do2learn.com.

TomTag is a form of picture schedule. From my own experiences of late nights spent printing, cutting and laminating pictures and symbols, I knew when designing TomTag that it had to be an easy to use system where none of that would be necessary. 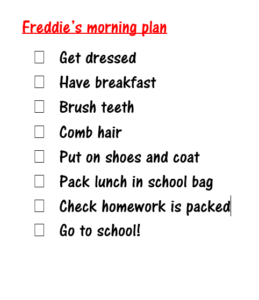 We use these often in our daily lives although we may not recognise them as such. Diaries, organisers, shopping and task lists are all forms of written schedules. They obviously work best for children who can read but you can transition from picture to visual schedules by adding words alongside the pictures and then gradually work towards replacing them completely.

You might start with a basic written list and cross off items as they are done. As skills emerge, you can move on to more complex written schedules such as day planners and electronic organisers.

These are the three main types of schedule you will come across although there are obviously many variations you can create for each type. Sometimes it’s a matter of experimenting with different ones until you find something that’s right for you.

In part 3 Visual schedules at home – making sure they work we’ll share some top tips for using schedules and how best to make them work effectively.

2 thoughts on “Visual schedules at home – choosing the right one”

We use cookies on our website to give you the most relevant experience by remembering your preferences and repeat visits. By clicking “Accept All”, you consent to the use of ALL the cookies. However, you may visit "Cookie Settings" to provide a controlled consent.
Cookie SettingsAccept All
Manage consent

This website uses cookies to improve your experience while you navigate through the website. Out of these, the cookies that are categorized as necessary are stored on your browser as they are essential for the working of basic functionalities of the website. We also use third-party cookies that help us analyze and understand how you use this website. These cookies will be stored in your browser only with your consent. You also have the option to opt-out of these cookies. But opting out of some of these cookies may affect your browsing experience.
Necessary Always Enabled
Necessary cookies are absolutely essential for the website to function properly. These cookies ensure basic functionalities and security features of the website, anonymously.
Functional
Functional cookies help to perform certain functionalities like sharing the content of the website on social media platforms, collect feedbacks, and other third-party features.
Performance
Performance cookies are used to understand and analyze the key performance indexes of the website which helps in delivering a better user experience for the visitors.
Analytics
Analytical cookies are used to understand how visitors interact with the website. These cookies help provide information on metrics the number of visitors, bounce rate, traffic source, etc.
Advertisement
Advertisement cookies are used to provide visitors with relevant ads and marketing campaigns. These cookies track visitors across websites and collect information to provide customized ads.
Others
Other uncategorized cookies are those that are being analyzed and have not been classified into a category as yet.
SAVE & ACCEPT